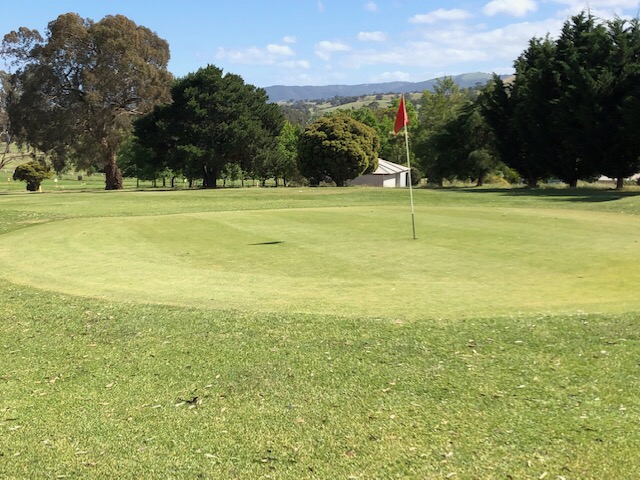 Royal Yea is in very good condition at the moment attracting over 30 players on Saturday for the second round of the A.H. Smith Trophy. The day’s result was decided on CB with Michael Spagnolo(10) beating Brendan Chenhall(17) with both on 41 points. Michael’s 22 on the back nine beating Brendan’s 20! Third also on CB was Brian Simmons(13) from fourth Alan Pell(14) on 38 points. Fifth was Martin Lowe(18) on CB from Greg Clements(16) sixth with 36 points. Brendan Chenhall was NTP on the 2nd and Allan Atkins took out the Club Award.

Wednesday sees Pair 22 – Stableford being played for the men. As there is no races next Saturday a normal Stableford Will be played at Yea. The following Wednesday the 18th of November we hope to see a few members go to Broadford to play. We will have to be there at 8’30 for a 9:00am hitoff. Names must be given to Pelly by this Thursday 12th so that we can book in.

Saturday the 21st November was to be the Murrindindi Masters but has been cancelled due to the pandemic. Instead we are going to have the Yea Spring 4 Ball and Stableford Golf Cup at Yea. To raise some funds for our club we will conduct a day where each player will pay $20 and be entered in both 4 Ball (men’s, ladies or mixed) and Individual Stableford. Bookings will be required and will be available over the day. Golf Vouchers will be presented to winners of the events. Presentations for the lockdown period in 2020 for men will be held at 5:00pm on this Saturday. This includes Trophy board events, the men’s championships and the payout of Club Awards and golf balls won. It is hoped that the bbq will be available for members to bring their own meat and a salad to share.